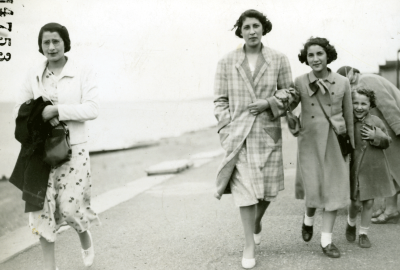 On February 26, I flew out from Philadelphia International on my Aunt Birdie’s eighty-seventh birthday. Because I rarely sleep on planes I had time to think about her and the nature of my visit.

Obviously I wanted to see her but it was more than that. She was an icon of warmth, unconditional love and laughter when I was a child. She was the light of an otherwise gloomy existence. I wanted her to know how much I appreciated her taking an interest in a little girl, and sowing the seed of self respect as no one else had. This in itself is a gift which I have passed onto so many people in my life, particularly my own children.

Birdie is the youngest of fourteen children. One died at aged two and the others lived to reasonable ages. She was gutsy and hilarious. In retrospect I see she had no boundaries. She was a hairdresser, as so many of my family were, and absolutely loved her work. Possibly she was a workaholic, but as they lived upstairs of the salon, she was involved with her family, Uncle Joe and their daughter Karen. I was her model from the age of twelve and have been every color under the sun. I remember one time she dyed my hair bright orange when I was 22. It was like great balls of fire and when I got home I telephoned her immediately and said, “I’ll be back tomorrow.” I didn’t have to explain. Regarding this visit in the nineteen eighties, I simply wanted to spend more time with her.

Upon entering the room, I was somewhat taken aback at her condition. She is very thin as she cannot eat any solid food. She has worn a wig since I can’t remember when and she sticks it on top of her head. Her hair is white – the wig is dark brown, almost black. She doesn’t care – she has dark hair, take it or leave it! Her voice, due to the thyroid cancer treatment, which is intense radiation therapy, is harsh and raspy. She always had a loud mouth, we said! Couldn’t ignore this voice! She was so thrilled to see me, together with my brother-in-law and sister-in-law. What a memory. She hadn’t seen them in years, but knew who they were. It started as soon as we settled down. If I thought there would be respectful quiet and that kind of pseudo caring of the whispering nature, I was wrong.

“My God – is she beautiful or what?” She was talking about me!

By this time we all knew this was no ‘sick room’.

“What are you doing darling?” she asked us.

I told her three times and she kept asking – she couldn’t get enough. More cousins showed up. Her wonderful daughter, (my favorite cousin), Karen had told the family I would be there to celebrate her mother’s birthday and if they wanted to see me they could come to her apartment. Some did. Others didn’t. I was grateful! Then the stories started.

She talked about her husband, Uncle Joe, an artist whom we all adored. He had MS and died from pneumonia at age 52. The stories went from how I was as a baby to how she loved hairdressing. “Remember when” went through the room, each relative sharing memories. Aunt Birdie was the only one who knew my natural father. She described him to me earlier on, but because my family was so secretive, she was reluctant until both Karen and I challenged her. Then she told me what little she knew and I was grateful that there was actually this Irish Traveler* who met my mother briefly and created me.

Then I told the tale of her making life easier for women who wanted to wear slacks. She couldn’t remember. During the war, there were very few nightclubs in London. There were many American soldiers and she became engaged to one, but broke off the engagement because he wouldn’t change his name, even for her. His name was Adolf!

The nightclubs were often filled with GIs and this particular night, Aunt Birdie wore a pantsuit she had just purchased. It was frowned up for women to wear trousers in the 1940’s, but she didn’t care. They arrived at the nightclub and the Maitre D refused to let her in as she wasn’t wearing appropriate clothing. She argued to no avail. She saw men coming in who weren’t wearing ties so they produced them. However, nobody had a skirt. Birdie, never one to back down, asked one more time, “Will  you get me a table?”.  Again she was informed that she couldn’t go in wearing trousers. At which  point, she undid them and dropped them to the floor! That’s my Aunt Birdie. They got her a table immediately and I thanked her for creating the freedom for pants wearing women to this day. What a riot she was.

Then she asked “Did you ever meet George?” I told her I had not. I knew of him, but had always missed him. Apparently a lot of the family did meet him and said he was lovely. In a nutshell, my aunt wanted to rent out the back of her hairdressing establishment after the death of Joe and George showed up. He lived quite a long way from her but took the space anyway. She had to be about forty-five or so.  He telephoned her every day. He saw her every week. He traveled from his home on buses and trains to see her. Went to the hospital to see her too. I was in tears to see the joy on her face when she talked of him. This is a real love story and tragic in a way, but no one could tell her that. She was satisfied with his weekly visit and his daily calls. Her 94 year old sister was there and she even she liked George. The man has to be a saint! She promised me when I go home again I will meet George. Her unconditional loving encompasses everybody.

The reason for my visit was not only to celebrate her birthday, but to see her, showing her my deep love for her, knowing she was ill. I didn’t want to fly home for her funeral.  What would that have achieved for either of us?  She wouldn’t have heard what I said. At that time, she could.

It was joyful and as I left she said, “You are beautiful darling and so special to me. Give my love to John –  he’s a lovely boy”. Blessing to you my wonderful, funny, courageous, glorious Aunt Birdie. You protected me when I was little and included me in your activities.

One more story. Thursday was half day closing in London so she would want to go to the West End (Piccadilly Circus, Trafalgar Square and so on). There was a place called Rainbow Corner in Piccadilly where the GI’s used to hang out. At that time it was okay to whistle and howl at pretty women. She used to borrow my mother’s engagement ring and I had to call her Auntie out loud as we talked and strolled by the GI’s.

I feel there is an Auntie Birdie book somewhere. What a gem! I still miss her and when I go home this year, she will be conspicuous by her absence.

*Irish Traveler. A gypsy. I am so proud to be the daughter of an Irish gypsy. I am sure that’s why I love earrings so much!

One thought on “Aunt Birdie”