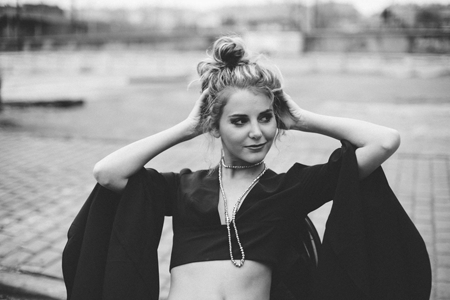 First let me differentiate between HUMILITY and HUMBLE. I know, the recovery programs insist on using humble. Humble to me is groveling, tipping your cap to your betters with body language that brings memories of the serfs in England, bowing to the Lord of the Manor.

In the United Kingdom the word handicapped is not used in regards to special needs people. It is because the peasants had to tip their cap when they saw the Duke or Duchess of the estate where they lived and worked. Cap in Hand – hand in cap. Another thought is that the word comes from humiliation. Having worked in the recovery field for a very long time, I recall humiliation was a large part of treatment years ago. I was disgusted then and am disgusted now.

Humility on the other hand, is standing straight and recognizing one’s Higher Power, getting the Serenity Prayer right and using it constantly.

The Serenity Prayer is the most simplistic prayer ever written. I saw it written on the wall of a cathedral in Ireland. We don’t use the entire prayer, as the first few lines make the point. I interpret it as doing something you can do something about and letting the rest go. If people say it is too long to keep saying, those of us who have been around for a very long time use the short form………….screw it. Others less charming than we are use another short form which is beginning with an F. Whatever it takes. As long as it works.

The reason why I am not very popular with some members of my various professions is that I believe that honey is more effective than vinegar, which means that sharing one’s character defects when necessary is acceptable, and then that’s it. I prefer to concentrate on character assets. It doesn’t matter which emotional injury the person is suffering when they come to me. I will dig and dig and dig until they realize we aren’t going anywhere until they come up with one character asset. Whew! What a challenge. It’s like watching a flower blossom when they get it. Magic and they do it themselves. I won’t do it for them. It is their rebirth that matters.

Oh well – the grasshopper brain is in charge once again. I don’t know why I wrote all that – it wasn’t my intention except that I am very proud of myself today (January 4th) and yesterday come to that.

I decided to share the events with you so that you too can recognise your character assets and rejoice with yourself (or whoever else will join in).

I really like to be thought of as eccentric. It is the prevention that halts the aging process. Of course I am not aging. I am ripening, weathering, seasoning and according to one young woman, marinating. Aging is in the system simply because we have been told to behave in a certain, dignified manner when we reach whatever chronological number we choose.

What caused a little consternation about writing this was the word proud. Got to be careful about that one. Pride goeth before a fall, we are educated to believe, and of course it can get out of reality if we are not on the alert. George Bernard Shaw wrote. “If you can do it, it’s not bragging”. We shall see. What I have decided to do is to tell you of both incidents and you can help me select the correct description of whatever I am blathering on about.

Last night, I went to bed quite early for me. That would have been January 3rd, the night of the great snow warnings. The Weather Channel people are lovely and become ecstatic at the thought of storms, floods, and the rest which bring them almost to orgasm. I fell fast asleep – an amazing occurrence – and then suddenly I woke up to a feeling of dread at 12:30 am. I sat up sharply and was awarded by an annoyed and indignant meow from the other side of the bed. I heard the agitated voices of the weather warnings and remembered I had not backed in my car, nor had I raised the windshield wipers. As if that wasn’t bad enough, I left a lot of my shopping in the boot (trunk) of my car. What to do. Nothing, said the evil twin – its cold enough for the frozen stuff to stay frozen. The halo-wearing twin suggested in her sweetly sacharin voice – you have to go and rescue the shopping. It isn’t healthy and rather unkind to leave it all out there in the bitter cold.

The saintly twin won and so I got out of bed and in my nightdress, covered by a short warm coat, I put my boots on and headed to the little parking place. The first thing I did was to empty the boot. This constituted lifting heavy bundles of wood, large bags of cat food and other human foodstuff. It took about twenty minutes to unload and drag the contents of the boot up the path and into the house. I began to feel heroic and my chest began to swell with accomplishment until I realised I was in a nightgown that was responding to the breeze from the large trees on either side of the parking lot.

Having thrown all the stuff into the little summer room, I then started the car to back it in and take the necessary precautions required by law of the weather channel. They can really scare the hell out of a person and I was susceptible. I turned on the engine and of course the headlights went on immediately. It was at this point I noticed the lights were on in my neighbour’s house across from me, so I turned off the lights and pulled out of the lot. Well at that time of early morning, it was very dark and it took about six ins and outs to get it backed in sufficiently straight and not blocking the other side of the parking lot. Satisfied, I turned off the ignition and checked the necessary safety measures. By this time I was turning slightly blue and as I do like colours to match went into the house where it was toasty warm.

How could I possibly stay in clashing colours? After all, a floral nightgown, with a cream coat, black boots and blue skin. Just didn’t do it for me. I decided to have a cup of tea before I went back to bed…………… I’m a Brit, of course I had to have a cup of tea and then the smugness set it. What a brilliant act of bravery at my age, to go out into the night, with danger at every angle and do the right thing. However I couldn’t help but visualize the scene if my neighbours caught me in my improper attire. Oh well. Next time perhaps. My son Daniel often writes about doing the right thing and I knew he would be so proud of his Mum. I slept well.

The next day, January 4th, I awoke to snow. Lots of it and winds too.

I decided to stay in my nightwear and snug robe for the whole day. There was nothing I needed so I settled down to watching television, eating what I wanted to (I’d hit the Deli the day before and had all the food I love and not supposed to eat, for such an event). I had several phone calls to see how I was managing in this awful weather and at the evening count had consumed 20 cups of tea. I suddenly heard a knocking sound at the front door, opened it only to find the sunshade umbrella has unhinged itself and was leaning against the door so that even if I wanted to straighten it, I couldn’t get out. Huh. Food for thought.  Oh dear. I said the F word again – as if I hadn’t eaten enough. Apparently not as I made myself a little sandwich to encourage the required energy for my next move. I INTENDED THE SHOVELTHE SNOW!!

Armed with a small dustpan, I removed the snow from the doorsteps. It was deep and challenging. I soldiered on, got the very big shovel and started clearing the path to the house. There was a lot of it and the snow was quite light in texture.  About halfway down the path my friend and neighbour arrived to help. She weighs about half a pound and is amazingly strong. She wanted to go around to the front of the house to shovel the ramp and get the umbrella out of the way.

Now, that is a very large summer umbrella and I had visions of Pat doing a Mary Poppins sky scrape, flying I know not where. To my amazement I convinced her to leave it be as I don’t use it at all. So this blog is concerning the word PROUD to do this work by shoveling snow, emptying my car boot and wanting people to remark on my brilliant courageous dedication to a clean pathway. I get to thinking about the word proud and wonder if it is a character defect I missed with all the other defects I had to deal with over the  years (not now thank goodness). The definition is mind-blowing upon reading from my favourite source, the Oxford English Dictionary.  Proud. Arrogant. Feeling superior. Oh my. That isn’t me. I don’t even see me as others do. I just don’t get it. How to deal with these emotions on my activities in the dead of night……………….hmmmmmmmmmmmmmmmmm.

Aha! I know. I would hope that people who know me would stand and applaud whenever I appear, bearing in mind the very important fact that I didn’t lose my breath with all this going on. Don’t overdo it as it will seemed staged (like it won’t be!!!!!). My younger daughter Michelle called and was concerned about snow removal. She told me I have to take care of myself and take no risks. I was taken aback for a moment, loving the concern. Then I thought………..take no risks? Did she forget how her mother is? As I have been saying for years, love conquers all. That’s what she did. She knows I am not going to stop so it was doubly delightful that she tried.

I am so blessed.